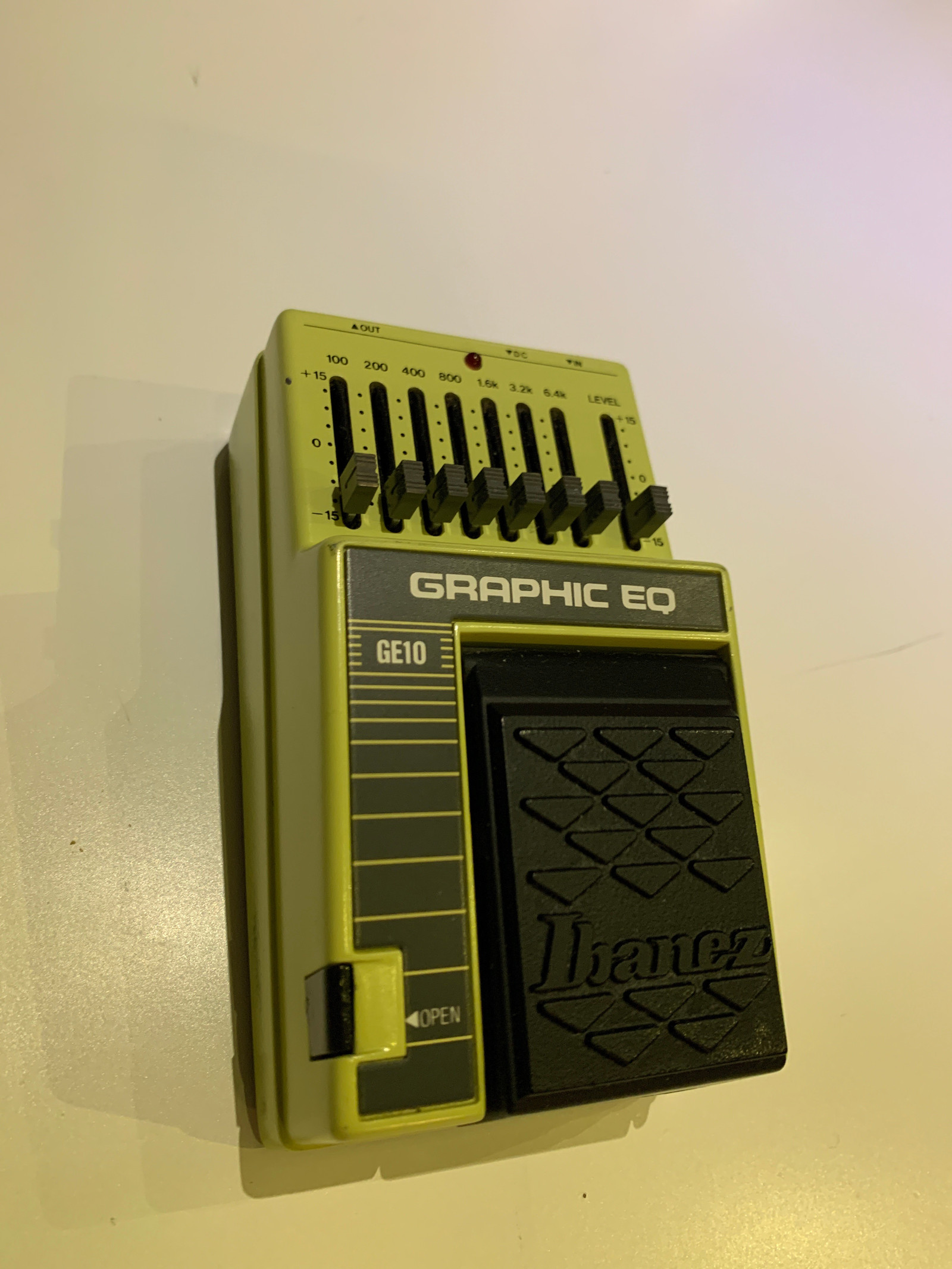 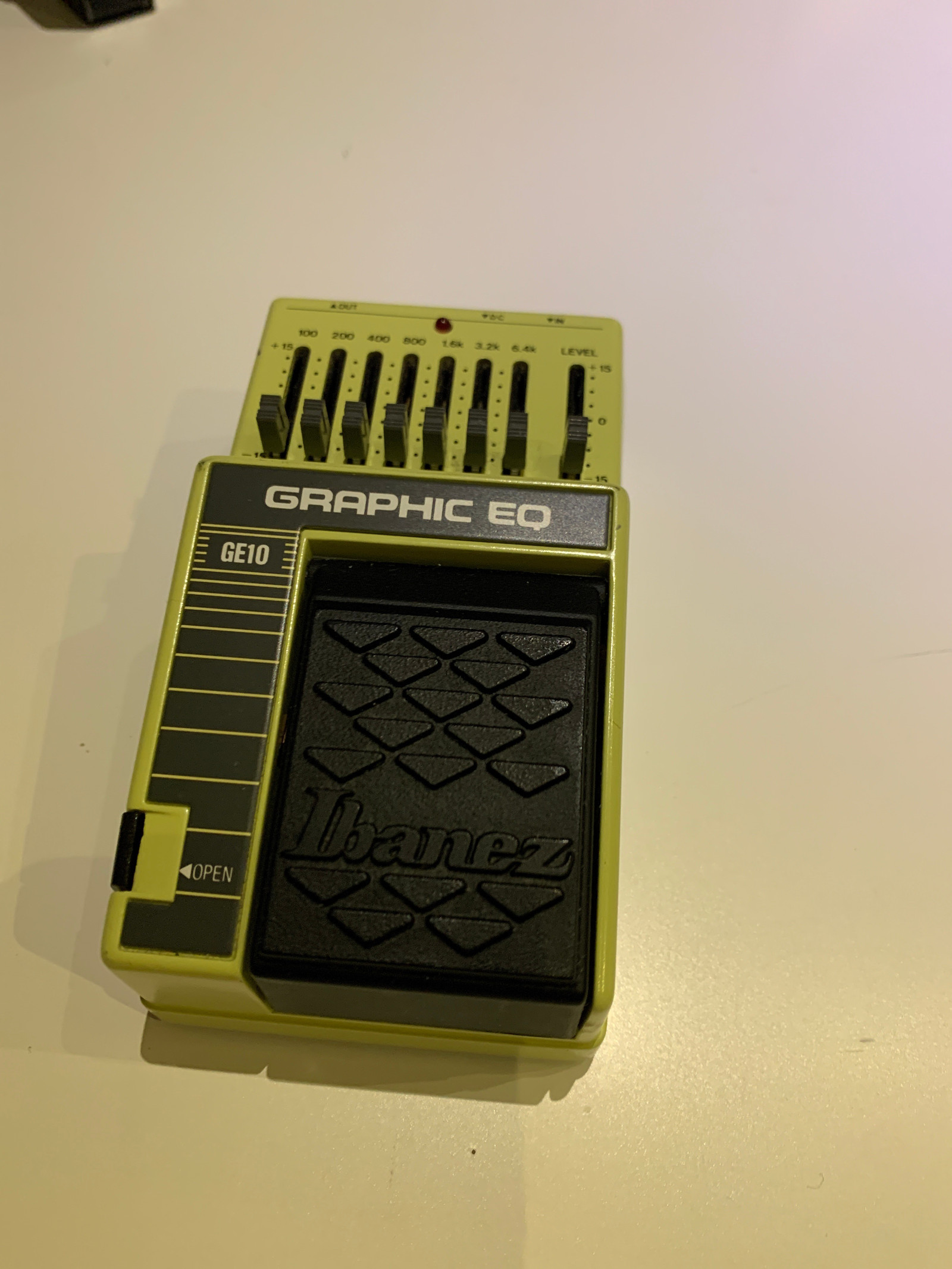 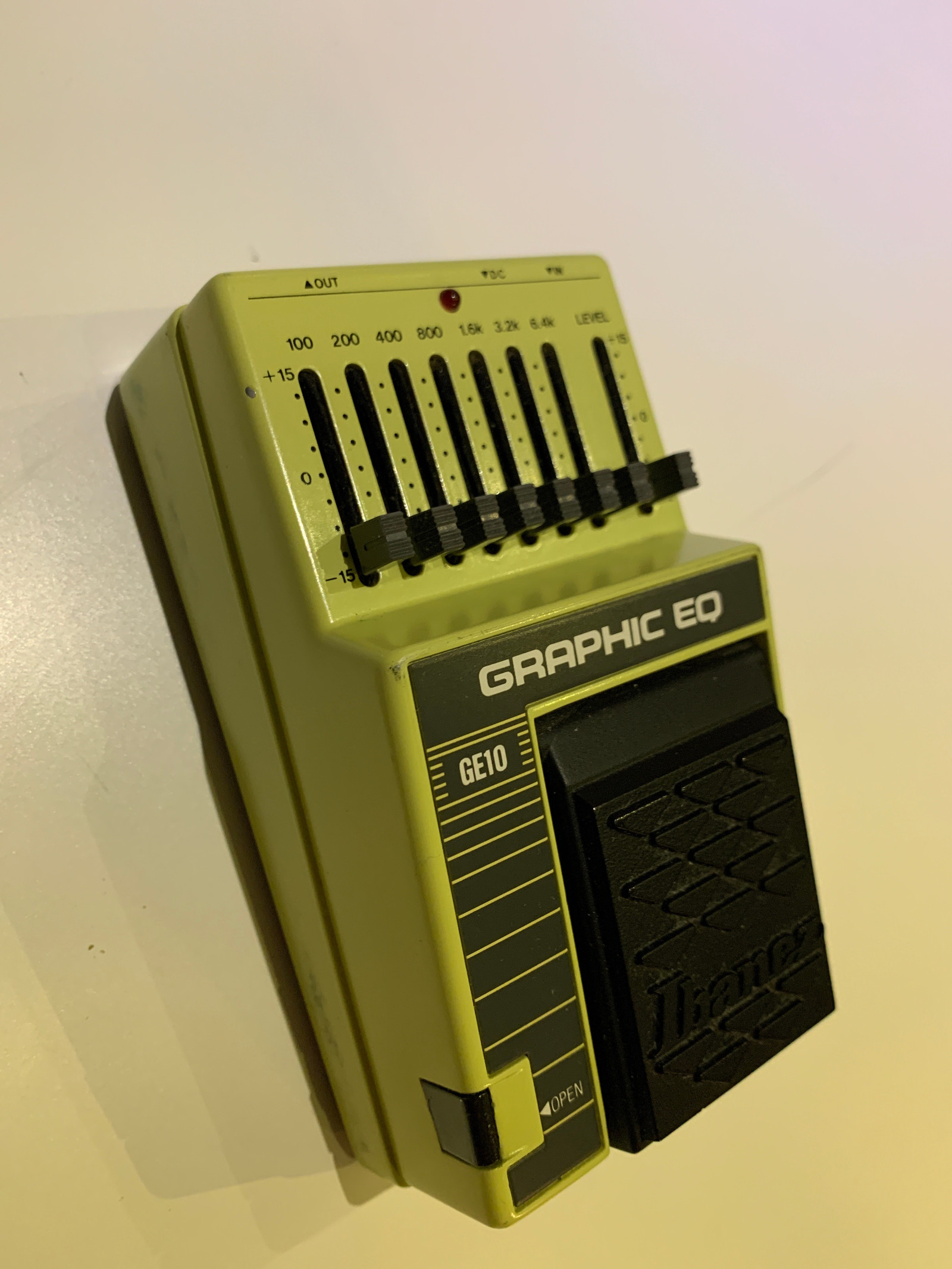 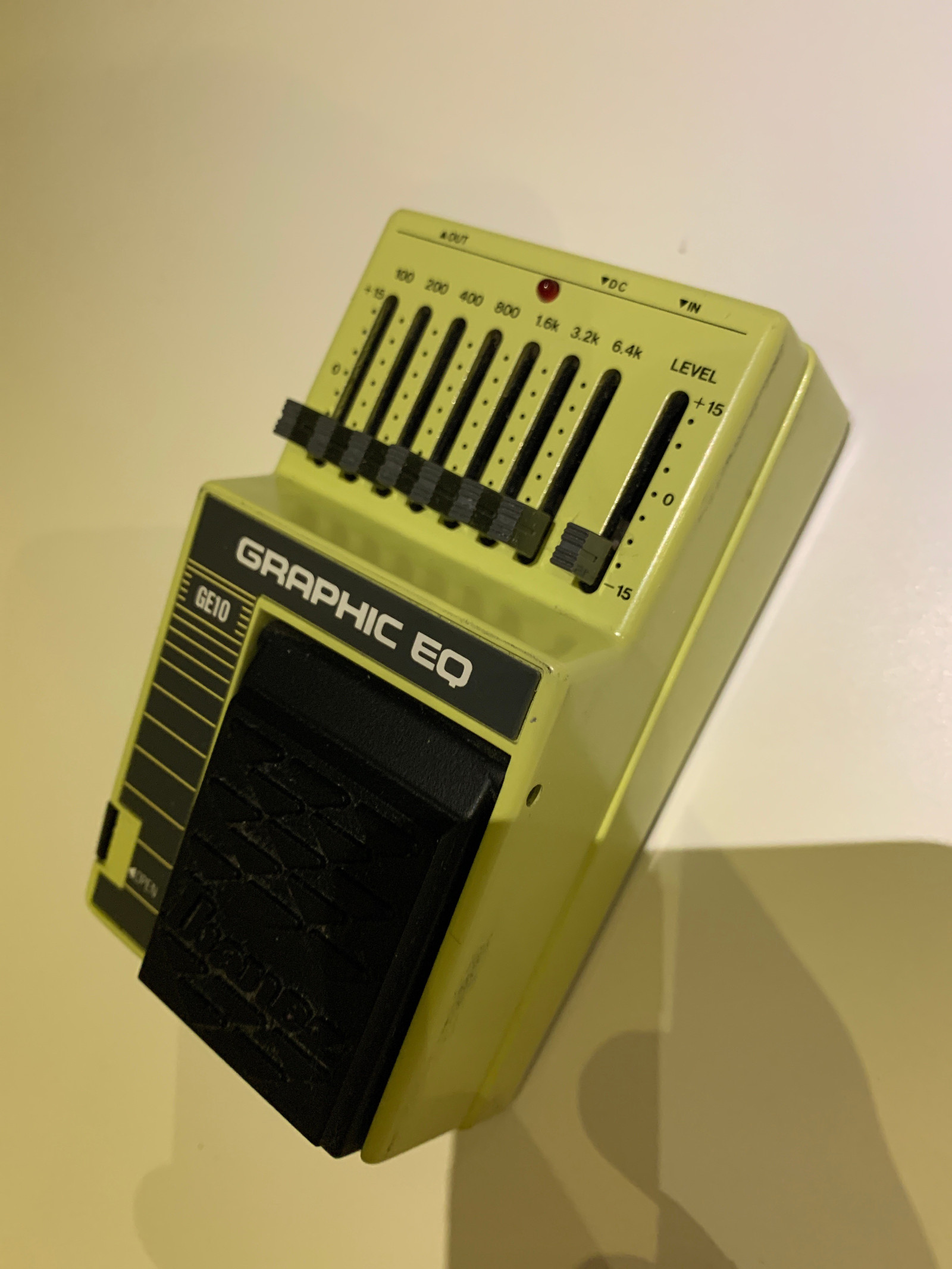 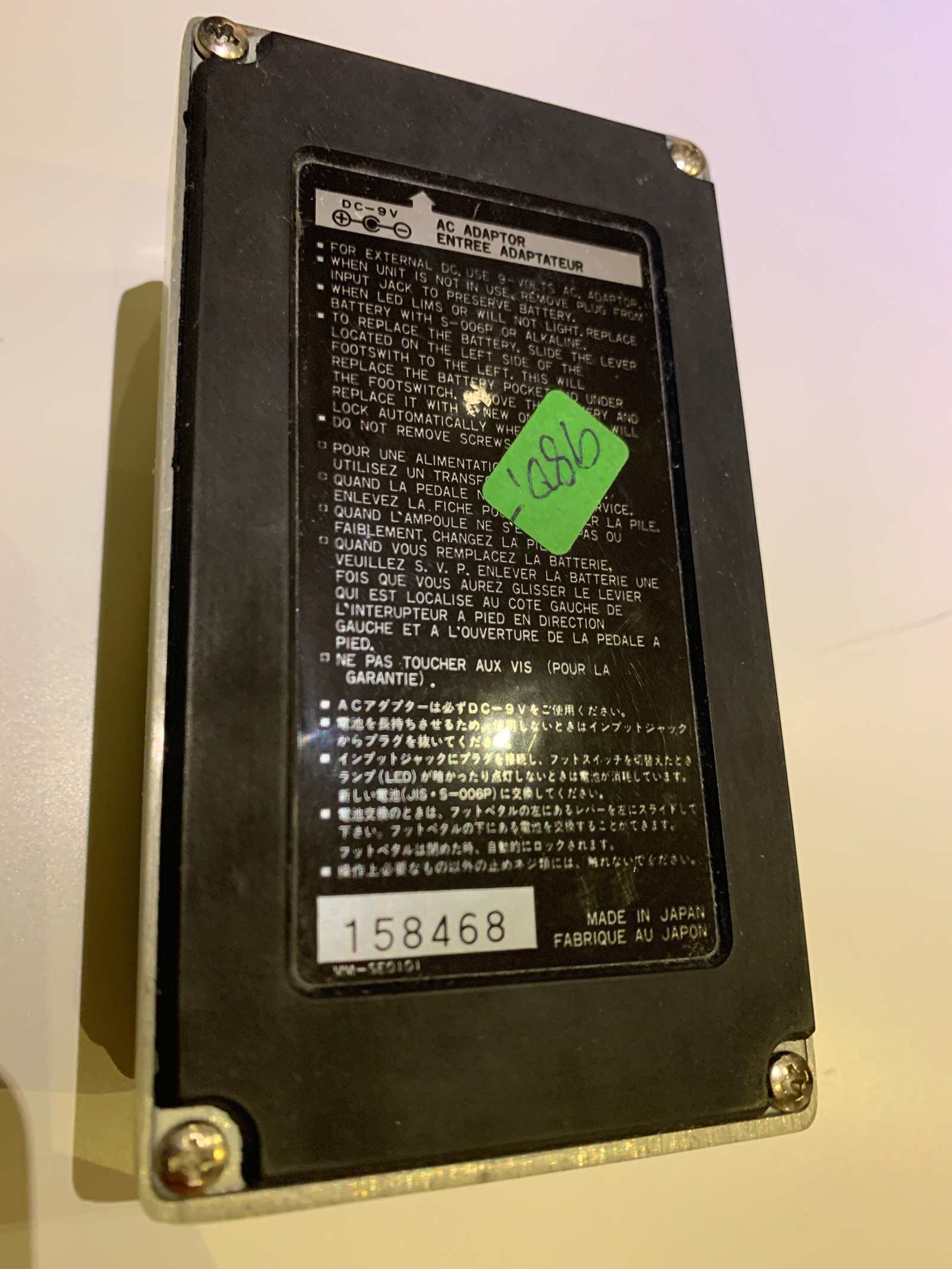 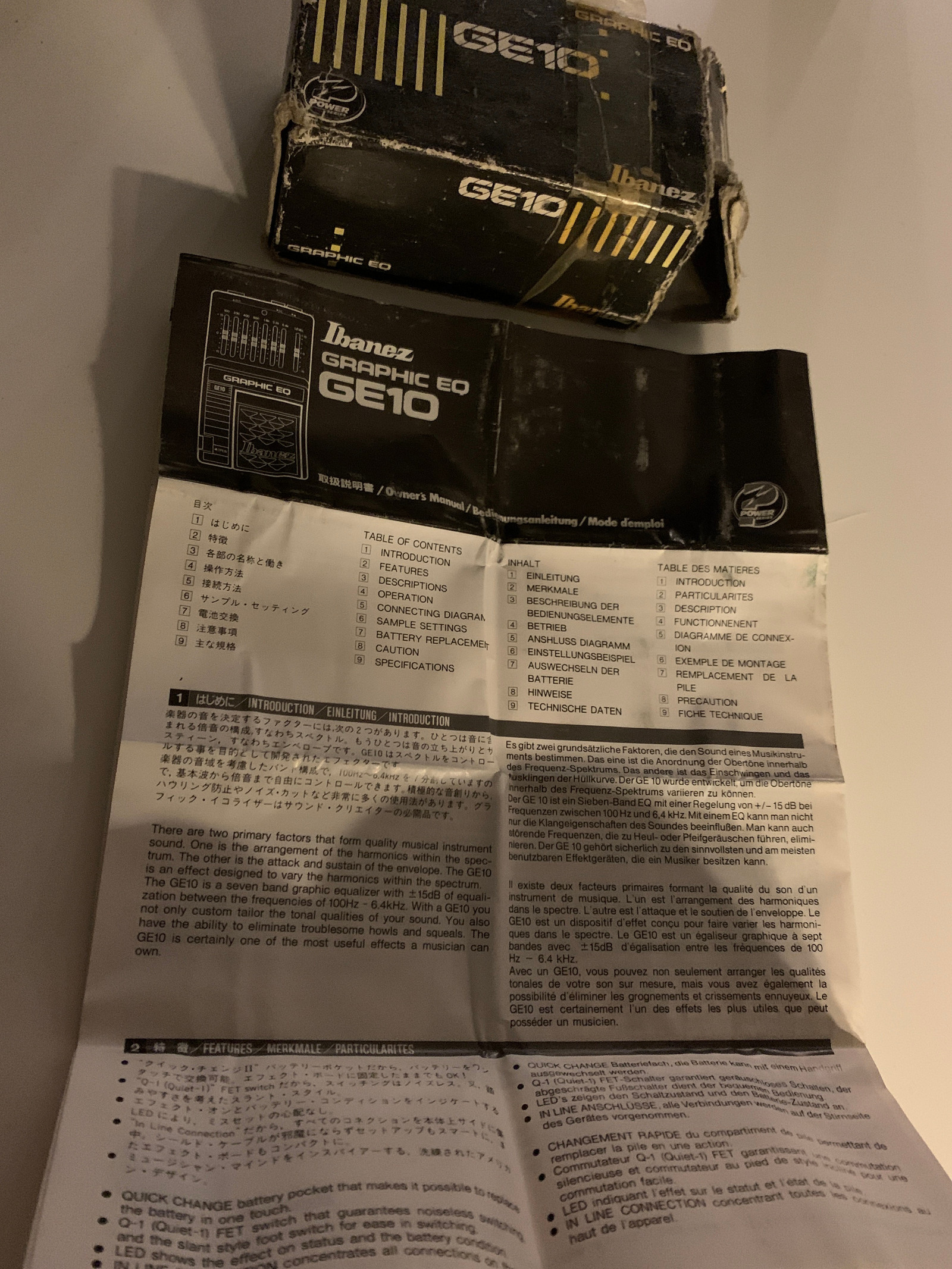 Til salgs
1 200 kr
Ibanez Graphic Eq GE10 equalizer med eske selges. Made in Japan. The Ibanez GE10 Graphic Equalizer was made from 1986 until 1993. Features The Ibanez GE10 Graphic Equalizer controls the seven octave ranges between 100Hz and 6.4kHz with +/- 15dB of equalization at each octave. There is also a master gain control that provides an overall +/- 15dB of variation in the output level without disturbing any of the filter settings. The GE10 is most useful as an overall tone altering device but it has other uses too. By manipulating the 3,2kHz and 6,4kHz filter, troublesome feedback howls can be reduced or eliminated. The GE10 can also be used as a gain booster by increasing the level control. Use A graphic equalizer can be a very valuable tool for a guitarist who needs versatility in basic tones. The GE10 isn't so much an effect as it is a tone "shaper". The seven bands or frequency areas covered by the GE10 are the most important areas of concern for guitarists. Any band may be boosted or subtracted (cut) as much as 15dB (decibels). A boost of 10dB at 200Hz for example would give a very bassy sound to any guitar by increasing the volume of the low notes and subharmonies. 100Hz, and under are very low tones that when boosted add a rumble effect, much like the resonance of a large speaker cabinet. Subtracting this range can help a muddy sound or attenuate hum and noise from bad A.C. lines or single coil pickups. 200Hz, as in the example, can influence the overal bass characteristics of the sound. Subtracting at 200Hz can emphasize a boost at the surrounding areas of 100Hz or 400Hz. 400Hz is where the wartmh of a guitar sound can be emphasized by a slight boost: especially helpful when used after a distortion device to simulate popular American tube amps with 12" speakers in open back cabinets. Subtracting at 400Hz can take away the midrange characteristics so offensive in acoustic electric guitars. 800Hz, like 400Hz can be used to add character to a distortion lead sound. Slight boost at both 800Hz and 400Hz can fatten up single coil pick-ups, simulating the sound of a humbucker (try also subtracting higher frequencies). 1.6kHz can be boosted for increased presence and clarity. Extreme boost can emphasize pick attack and amp feedback characteristics while slight cut at 1.6kHz can smooth out a rhythm sound. 3.2kHz boosted adds bite and brilliance while 6.4kHz deals with the "sizzle" or "sparkle". A guitar with humbuckers set in the center pick-up toggle position with both 3.2kHz and 6.4kHz boosted can sound like a single coil type guitar. from: Ibanez Power Series pocket manual﻿ https://www.tonehome.de/ibanez/power-series-10/ge10-graphic-eq/ 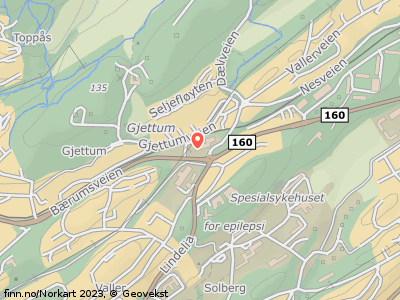